This site is in loving memory of Herman Knight Beaber who was born on May 25, 1907 (related to Betsy Ross - First American Flag maker 1776). He attended college for two years at the University of California, he studied chemistry and electrical engineering. He left college and entered into the ministry in 1929. In 1940 Herman Beaber traveled to the Philippines for missionary work. He attended two semesters at the University of the Philippines studying foreign language. In 1941 war broke out with Japan, he spent 3 years as a civilian POW. He returned to the United States in 1946. Later he returned to the Philippines with his sister Bernice to continue missionary work in 1947. Due to health reasons he left the ministry in 1951. He then moved to Texas. He worked as a counselor in a county home for children and later as an Assistant Superintendent and Manager of boy's home, near Houston, Texas. He later married Mattie Blanche Berry in 1955 and moved to Dallas, Texas. There he worked as a Manager for a large truck rental company. In the early 1960's he adopted two children. A girl he named Esther and later a boy he named John. He retired in the 1970's. His beloved wife Blanche preceded him in death. He has seven grandchildren and three great grandchildren. He passed away at age 93 on February 5, 2001. Herman Beaber was an exalted man with fervent convictions. He touched the lives of many. He is deeply missed by all that knew and loved him.

In late 1941 war broke out in the Philippines with the Japanese. Many endured imprisonment, including some ministers who were interned at the Los Banos Internment camp located about 40 miles south of Manila in the Philippines. They were Willie Jamieson from Chirnside, Scotland; Ernest Stanley from England (internment at Santo Tomas; Leo Stancliff of Bakersfield, California; Cecil Barrett of New Zealand; and Herman Beaber of Hydesville, California, who kept a diary during their time as prisoners of war (1942-1945).

On January 6, 1942 Herman and his fellow ministers were picked up by the Japanese and were taken first to the Rizal Memorial Stadium where they were registered. Then they were bundled back into the car and taken to Santo Tomas University grounds. They later were released and allowed to continue their church work. (with the exception of Ernest Stanley who chose to remain in Santo Tomas an official interpreter for the Internee Government). They had to give weekly reports to the Japanese detailing their activities and were required to wear POW arm-band identification. They were confined to their home and restricted from moving about the city, except for essential shopping (food, clothing, drugs, etc.), medical treatment and exercise, limited to their immediate neighborhood. They were however, allowed to have religious services (Sundays only), from January 15, 1942 until they were taken to prison at Los Banos on July 8, 1944, along with all the other American missionaries in the area. "Los Banos was the former University of the Philippines, the Agricultural School at Los Banos was located in a town on the island of Luzon. It had been converted into an internment camp. It was a plot of about 55 or 60 acres with a barbed wire fence around it, for more than 2,000 civilians who had the misfortune of falling into Japanese hands at the beginning of the war." (Liberating Los Banos

At Los Banos they were assigned their barracks (a shelter with outer walls made of bamboo mat - called sawali ). At first the camp was a delightful spot. There were four hundred and fifty: priest, nuns, single men and women missionaries, and a few families with children. They were separate from the others that were in the camp before. They kept busy with all kinds of work such as cutting grass and brush, sanitation squad, barbering, gardening and cooking in the camp kitchen.

As time passed and as the Japanese began to lose the war, things became very desperate at the Los Banos prison camp. While Herman Beaber's diary does not record that they were tortured, they nearly starved, and many in the camp died from disease and slow starvation. Herman wrote in his diary... "Naturally there is theft of food in camp. It is considered a major crime. We see people (respectable people) looking into garbage cans for banana skins, etc. (If you want a real delicacy... Fry some banana skins in rancid coconut oil.) People going to points in camp several blocks away will have to sit down to rest. Fights occur in the food lines. Some have eaten bugs and beetles - so they say."

Herman left from the United States for the Philippines in 1940 weighing 202 lbs at 6'3" and he weighed 140 lbs when he was finally rescued on February 23, 1945. On that day American soldiers freed over 2000 prisoners at Los Banos in a daring guerrilla and paratrooper rescue, just one day before they were all to be executed by the Japanese. Army Chief of Staff General Colin Powell (now former Secretary of State) proclaimed- "I doubt that any airborne unit in the world will ever be able to rival the Los Banos prison raid. It is the textbook airborne operation for all ages and all armies."

Herman Beaber wrote..."Let me say that you who have never been deprived of seeing Old Glory and all she stands for, for three long years, cannot understand what that sight would mean. We feel heavily indebted to our rescuers. (No greater love has a man, than to lay down his life for another) We are mighty proud to be citizens of a great country like the United States. On the other hand, we are grateful to God for His care and protection, and now that He has spared our lives... we feel more inclined than ever to give Him our best."

Herman Beaber wrote in his diary (February 23, 1945) "at 7:00 a.m. sharp, we heard and saw nine large transport planes flying low, and passing close to the camp; perhaps one mile to the east. Even as we all watched, we saw doors open and paratroopers came tumbling out. OH WHAT A SIGHT! With a tropical sunrise for a background, we saw about 150 parachutes open one after another and settle slowly earth-ward out of our sight behind the distant trees. We knew help had come but had little time to contemplate this good, even before rifle fire commenced to the west of our camp. It was guerrillas with American Officers who had been waiting there for hours...Bullets whizzed and buzzed through the camp. I was hugging the floor, looking out under the large crack beneath the door at the Filipinos and Americans sneaking into the camp, their rifles ready. The guerrillas...defeated the Japs in quick order. It was over in less than an hour. All the Japanese guards were killed, I believe. Planes hovered overhead. As the firing died down a bit, we heard the roar of motors...then we saw the large amphibious tractors (Amtracs)...that had come across the water, down the lake, for the express purpose of rescuing us." Deliverance! It Has Come! ......... (c)2001 John S. Beaber, U.S. Copyright Office at the Library of Congress, registration number TXu 1-024-026

For a FREE transcript of this book e-mail the website administrator by clicking on the blue "e-mail me" animation at the bottom of this page. Thank You! 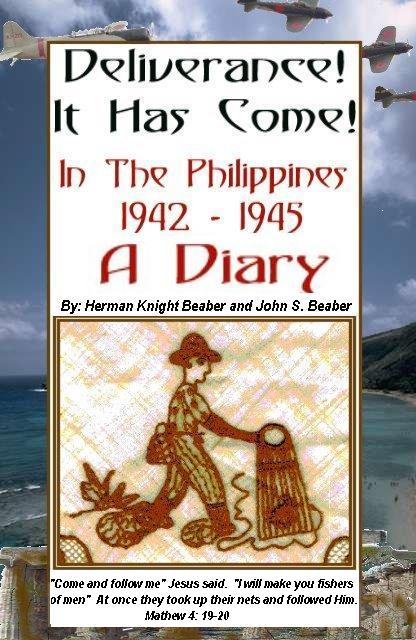 Other Related Books from

Leo, Willie, Herman and Cecil all returned to missionary work after their release from the Los Banos internment camp. After his release from Santo Tomas Ernest Stanley went to Japan with the American Army as an interpreter. He later married a Japanese lady and took up residence in Japan and adopted a son. Ernest Stanley was born around 1902 and both he and his wife died in 1990. Herman returned to preach in the Philippines, but left the work in 1951 for health reasons. He later married Blanche Berry and adopted two children, John and Esther. Herman died February 5, 2001, at the age of 93. His beloved wife Blanche (Oct. 23.1998) preceded him in death. They both are interred at Laurel Land Cemetery in Dallas, Texas. Willie Jamieson went into the ministry in 1905. He succeeded Jack Carroll as overseer of some of the Western USA Christian Convention Church (2x2s) and passed away October 11, 1974. He is buried at Pacific Crest Cemetery, Redondo Beach, CA. About 2500 were in attendance at his funneral service. Funeral service for William Jamieson Cecil Barrett was born in England in 1902 and later moved to New Zealand and went into the ministry in 1934. He traveled to Japan and preached there until the threat of war and then went to the Philippines in 1941. Reportedly, Cecil returned to New Zealand to recuperate after his internment and then later continued as a missionary in Japan until 1964 and then moved back to New Zealand and continued to preach there until his death on Nov 6, 1968. Leo Stancliff went into the ministry in 1933. He first went to the Philippine Islands on January 4, 1940 and was interned in the Los Banos internment camp during the Second World War. He spent many years in the Philippines working among people who spoke both the Tagalog and Illacano languages there and then later spent several years in Guam and Ponape before returning to spend his remaining years in California and Nevada. He suffered a stroke in January of 2003. Leo was born on December 19, 1912 in Torrance, California and died at 2:45PM on Tuesday October 18, 2005 in Bakersfield, California. His parents, Clifton and Talitha Stancliff of Bakersfield and his brother Wilfred, also of Bakersfield, preceded him in death. He is survived by a brother Robert Stancliff of Stayton, Oregon and a sister Laurena Escola and brothers Gerald Stancliff and John (Jack) Stancliff all of Bakersfield. He is also survived by many nieces. His funeral service was held at the Holiday Inn Select Convention Center Bakersfield, California on 10/29/05 at 10:00AM.. Burial followed at the Hillcrest Memorial Park. He will be long remembered and loved by his fellow workers and friends. Another interesting note... Out of the five Missionaries interned in Japanese prison camps... Herman, Willie and Leo all lived to age 93. Ernest Stanley was age 88 when he passed away, and Cecil was age 65. This is pretty amazing when you consider all that they had to endure as POWs.

Ship below named - "President Cleveland" - San Francisco, CA. USAHerman Beaber with his Mother and Dad (in the left picture) and
Brother Fred, Sister Ardis, Herman and Sister Bernice (in the right picture)                 Pictures were taken (January 12, 1940) before Herman left for the Philippine Islands. 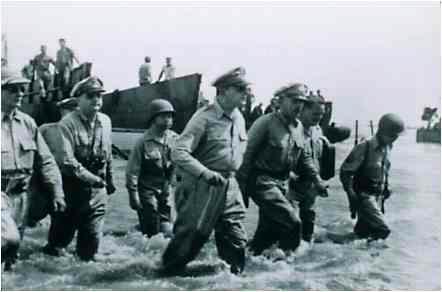 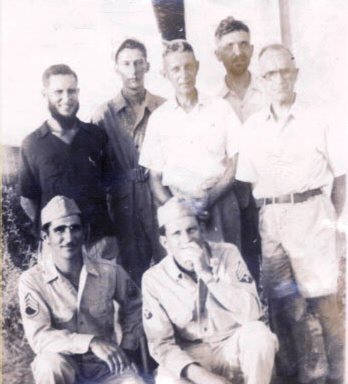 Please Make a Small Donation. to support this site and

HOME | Leo Stanclif's Internment | Tribute to Ernest Stanley | Willie Jamison's Internment | Barracks 17 | Landry Letter Cecil Barrett's Internment | Beaber History | WWII 11th Airborne Hero | Ithascome's WWII LINKS | Hymns Old and New The materials on this web site are made available for use in research, teaching and private study. For those purposes the user may reproduce these materials (by download, printing, etc.) without further permission. To my knowledge, all graphics and pictures on this site are public domain. If not, I apologize and will correct any errors.